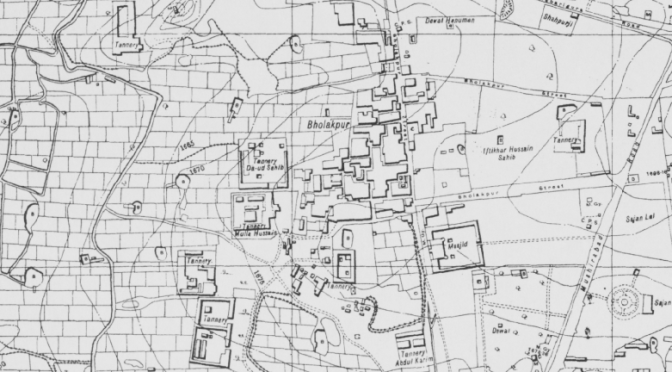 Post by Indivar Jonnalagadda based on fieldwork conducted in August-September 2014.

Note: This essay is not presented as an authoritative historical account of Bholakpur. It consists of glimpses into the history of a place mostly based on the memories and experiences of people. This information has been cross-checked with the sparse documentation on Bholakpur where available. The maps presented here take the various localities of Bholapur as units to provide a schematic idea of the evolution of built environments.

In a richly detailed hundred year old map of Hyderabad by Leonard Munn, Bholakpur is depicted as consisting mostly of large tracts of agricultural land (in the hands of jagirdars). At its centre, is a mosque, the Badi Masjid, and some large leather tanneries. The map also shows two main streets going in towards the mosque and the tanneries, streets flanked by buildings. Mostly godowns or mandis for the leather industry. 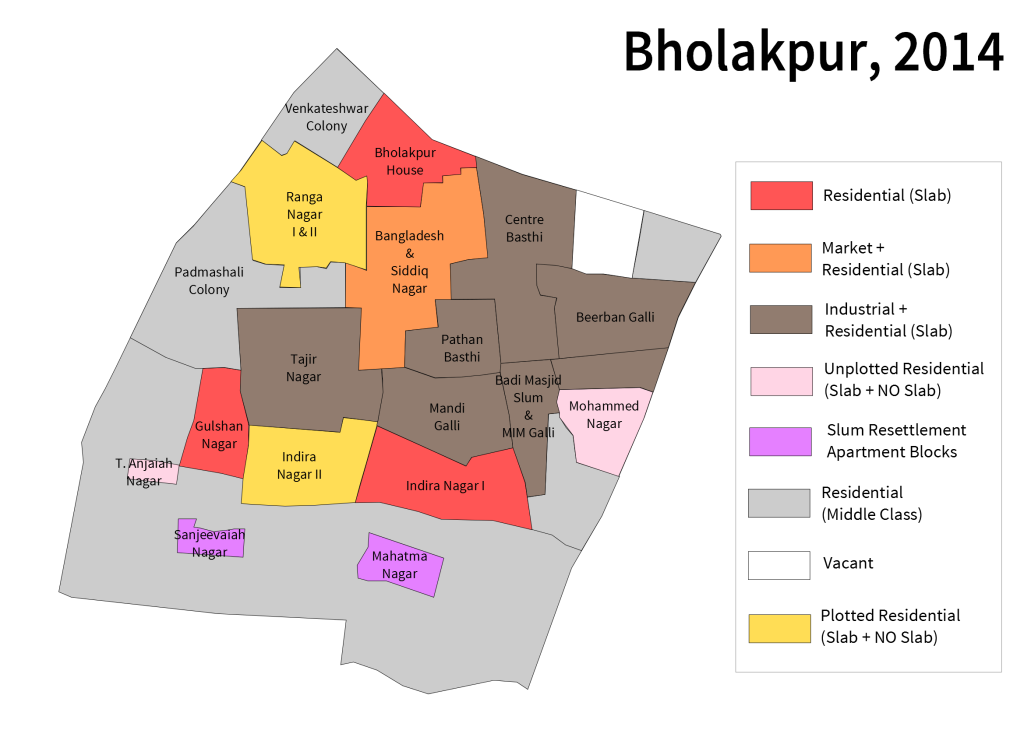 Bholakpur, today, looks quite different.1 It’s southern frontier and north-west corner are “developed” middle-class residential complexes. The rest of Bholakpur is described as a basti. Although it literally just means settlement, it’s the colloquial term for slum. The Badi Masjid still sits at the heart in renovated splendour, surrounded by a basti of about 36000 voters and others. The handful of large tanneries have disappeared. In their place, there are now innumerable small enterprises dealing in scrap of all kinds. Majorly, animal skins and other animal parts, plastic, metal scrap, electronic waste and old furniture. Bholakpur is a “Muslim dominated” area, with some “Hindu” presence. The figure on the streets is 60:40.

From these thin snapshots of the two end-points of the chosen time interval, no useful inferences can be made. At most one can say, “urbanization” in a grave tone and leave the details to the dustbin of history. But exploring exactly how the urban process transformed Bholakpur over these 100 years is the aim of this essay. It tries to present a history of this “urban process”. But that is a misleading sentence. There is no “urban process” that set Bholakpur on a path to where it is today. There is no grand dialectic of urbanization and the onset of modernity into which Bholakpur’s trajectory can be fitted. The very metaphor of trajectory is misleading. All these conceptual devices mislead us into believing that time is the only dimension in which transformation is meaningful. Let’s not get into the tiring philosophical nitty-gritties. The claim being made here, instead, is that while transformations manifest across time, it is in space that the encounters which provoke transformations occur. This unsettles the idea of a temporal dialectic, because across time, space is constantly transforming and provoking new transformations that could have a long duration or a short one, or could be disrupted or disturbed or dislocated by other spatial circumstances. The “history of the urban process” in Bholakpur, then, is an abstract narrative of transformations in space-time that is actually made up of several inter-weaving particular histories; histories of survival and squatting, histories of land reform, histories of trade, labour histories, histories of religious groups and caste groups, histories of migration, histories of governmental intervention, etc. Each of these particulars is once again in the plural for the same reasons and none of these histories can be told without paying attention to the spatial configurations at different points in time.

These spatio-temporal configurations have 3 dimensions.

This essay, therefore, will be a kind of archaeological excavation of Bholakpur as it is today. The idea is to unearth layers emerging from different times and identify certain major moments of erosion and sedimentation in different locations, even meteoroid interferences. These moments will be presented as snapshots. snapshots of changing built environments, of “internal” territorializing and deterritorializing practices, and of “external” political-economic, governmental and cultural relations being brought to bear on a place. The following snapshots are histories from Bholakpur.

“ We really can’t say [when it was established]. Bholakpur is a very old basti. There’s a 400 year old Qutubshahi mosque in Bholakpur and also a 350 year old Pathan mosque from which Pathan Basti takes its name. Bholakpur used to be a village, then it became known as a slum. Now, Pathan Basti atleast is no longer a slum” [Interview, 7th August 2014]

2: Another Look at the Munn Map 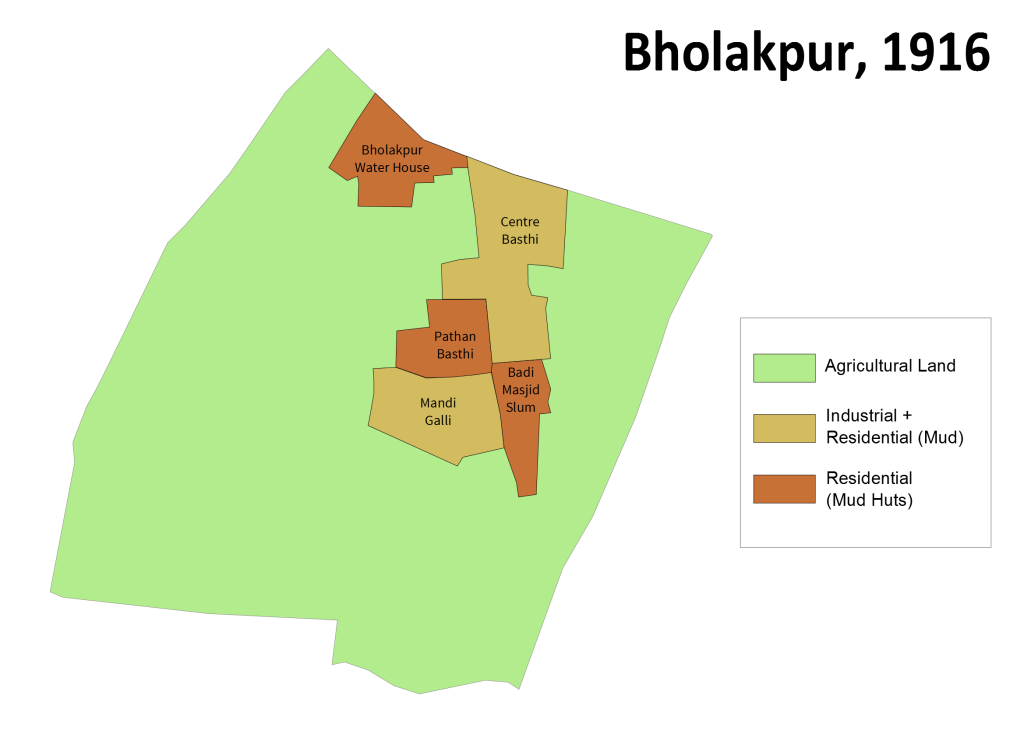 The opening lines of the essay re-present the various spatial elements depicted in the Munn map, all of which are of historical significance, but one must also acknowledge those spatial elements that are invisible in the map. Huts!

The map depicts large tanneries and so much farm land, but depicts nowhere the dwellings of workers. It reminds one of the geographer in The Little Prince who says “We do not record them,.. because they are ephemeral”. Because huts are impermanent structures that did not make it to the Munn map, it effectively erases the presence of workers from Bholakpur of 100 years ago.

“ My grandfather was from [Bholakpur]. This used to be called Golala(shepherd) basti, it was all Ranga Reddy’s property. The people here had come mostly from Nalgonda. Ranga Reddy had given pattas to some of his workers, others squatted on the land anyway.” [Interview, 7th August 2014]

“ [Mohammed nagar] exists since 150 years. It was private land earlier. When the city was not very developed, people from all over the Nizam state would come here because it was next to the Badi Masjid. People built small huts.” [Interview, 28th August 2014]

“ There were fields around Centre Basti. This was a residential, public place. It’s now become a centre for alot of shops. But this is really the main Bholakpur, or Bholakapuram as it used to be called. There used to be mud huts (kaveli ka ghar) earlier. It was only in the 1960s that we made houses out of dang.” [Interview, 25th August 2014]

There were huts for agricultural labourers, huts for leather workers, there were huts around the masjid. From these huts the present day population of Bholakpur has emerged, in them the forbears of the present day population first settled and made a home. The huts were as much crucibles of historical changes in Bholakpur as any of the other elements depicted. Let us return to the elements present on the map now.

The Badi masjid, constructed in the 17th century, serves as a sacred, hence protective, space where the solidarity of the Muslim community is affirmed. The institution of religion, and the religious group as a collective, play a fundamental role in the life of a community. Group solidarity ensures a certain minimal social security to vulnerable members of the group – atleast in the form of free meals at the masjid during Ramzan and other festive times and access to free education in madarsas. These practices are anchored in religious norms, particular to Islam, which provide a particular framework for redistribution of wealth within the community. The masjid is also an important site in terms of the history of housing in Bholakpur. Several migrants from all over the Nizam state had built huts around the masjid and some, with very few means at their disposal, even found shelter within it. But why were people drawn to this masjid? The simplest answer is the availability of work.

While Bholakpur’s location on a main road connecting Hyderabad and Secunderabad meant that several work opportunities were available even outside Bholakpur, the leather tanneries in Bholakpur, which were a flourishing business 100 years ago, were also a major source of employment. Because leather work involved handling animal hides, including bovine animals, the workers were mostly Muslims and ex-untouchable Madiga caste-members2. But why did the leather tanneries come to Bholakpur?

“ Nothing starts just like that. Even a garbage yard – that doesn’t happen automatically – one person starts putting garbage, then another person, then another person and then it becomes a garbage yard – koi bhi cheez aisa suddenly start nahi hoti – it can be positive or negative. So why did the market form here? Why didn’t it happen anywhere else but here? There is a long story which starts before independence.

When Hyderabad was under the Nizam’s rule – it wasn’t under the British – there was no trade point here (in Bholakpur), no mandi. But when the British had to enter into business with the Deccani state – it came to Hyderabad. There were already leather industries in Chennai because the British needed leather for their use.

That’s why they developed leather industries in Chennai and Kanpur which were under their control. But where does the leather come from? Leather was generated in the South – in a small way – it was collected door to door, then shop to shop, then to the big storage. Like this leather from all the districts used to come to Hyderabad to Bholakpur.

So buyers from Delhi, Chennai, Kanpur and Kolkata used to come to purchase raw hide from Bholakpur. We didn’t have the technology to do tanning here. At that period there was no proper transportation, people used to take it on bullock carts and it would take a long time to get from one place to another – and the rawhide would not have lasted the journey (in its unprocessed state) to Warangal where the trade would be made – at the border of the Nizam State. Then people of Madras started to enter (into the Nizam State) through Warangal – they had the skill, expertise and knowledge to tan the leather.

They came and settled outside the walled city – Hyderabad was constructed for a population for 4 lakh people only. Since this leather trade belongs mainly to Muslims, people started gathering here – because of the mosque built by Quli Qutub Shah. The owners of tanneries were Muslims – the workers were Hindus. The workers also belong to Warangal area and Tamil nadu. It was a totally new population that came from outside, rather than inside Hyderabad.” [Interview, 8th August 2013]

This is just a first glance at the history of the leather industry in Bholakpur which persists as a crucial force of change till today. There is another element in the Munn map, however, which has completely disappeared; agriculture. This turnover of land-use is another important process that facilitated the transformation of Bholakpur to what it is today. It will be illustrated in the following segments in part 2.

1 It’s a different matter altogether that the spatial identity of Bholakpur today may not coincide entirely with what it was a hundred years ago. The boundaries of Bholakpur, electoral ward 92 of the present day Greater Hyderabad Municipal Corporation was a later governmental construct. But it is these boundaries that are being considered throughout the essay. They have been reified in the everyday lives of people.

2 I use the term “ex-untouchable” because it is not meaningful to speak of “scheduled castes” in Early 20th century Nizam ruled Hyderabad.